Skip to content
Home » Interviewing the Students: What Makes This Dojo so Dope? 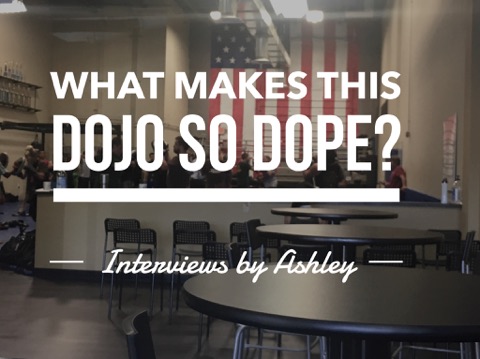 “You’ve got a herniated disc. You can’t do it.”

Anyone else get this sort’ve self-doubt internal talk? I sure did, before I tried out Trident for the first time. In fact, a lot’ve these awful, stress inducing thoughts held me back from committing to the life altering practice called mixed martial arts. I’d hurt my back not long before. I was working two jobs. And going through a break up. And applying for an advanced degree. And working out twice a day to keep the pain at bay. How could adding yet another juggle-ball to my responsibility rotation possibly be a good idea?

There is none. It just was. 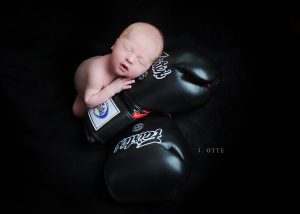 See, counter-intuitive though it sounds, something about immersing myself in Trident Academy for Martial Arts’ striking program made that cavalcade of tasks easier. It became the oil that made the rusty bits of my life engine function far more fluidly. Now, don’t get me wrong. It’s not like I went in there once and all’ve my issues were permanently remedied. (Not even a little bit.) Rather, I had to keep coming back to the source of this sorcery to get more. It wasn’t easy, either. Many days, I strolled through those doors with my life balled up like some unsolvable problem. But that’s the magic of getting on the mat and training amongst greatness. It’s just as beneficial for the body as it is for the brain. What transpires during that time feels like John Nash (or think Sheldon, a la “The Big Bang Theory”, if you don’t get that initial reference) stepped up to the whiteboard of my world and plugged in just the right numbers. It’s brilliant. Within a mere hour, my world can unfurl from some montage of fails to a straight up formula for winning. All my issues feel fixable. So, vague an answer as it seems, I’ve stayed because, among so many other things, it’s a kind’ve therapy for me. That’s one major reason I stay. And, as I look around me, I realize… I’m not alone. 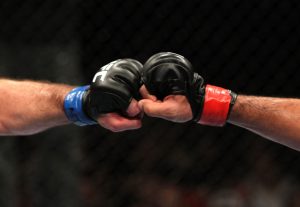 The same people keep showing up. And they keep leaving, relieved – just like me.

Also like me, they keep returning for more, frequently.

Curious, I wanted to know why. What drives them? Is it the same thing that drives me? After chatting with a few friends from Trident, I got my answer. And I began to notice a lot of them had similar reasons (not necessarily aspiring to become Conor McGregor number next) for training. And not just for training – but for training here, specifically. For instance, BJJ blue belt and purple tip striker Anjanette Villamor shared with me how she woke up on her 37th birthday, ready for change – not just in her weight, but also in the ways she re-channeled stress. MMA, she figured, would be a great way to combine all’ve that:


“I literally woke up on my 37th birthday (gasp!) and said #$@% this; I need to get in shape (I was 20lbs. heavier) and KNEW I wouldn’t be able to commit myself to a gym. I Yelp’s martial arts schools in the area and chose the one with the one with most reviews. I’ve always been interested in martial arts but never had the guts to enroll in a school. I signed up for the BJJ class only because it was known as “The Gentle Art” (ha.) and figured with my bad back that this would be manageable. I threw up not even 10 mins into the drills. I was determined not give up just yet and signed up for striking and I fell in love. I became a glutton for punishment albeit sadistic and dove into MMA, Muay Thai, FMA and JKD. Yep all at once. Why? Because I was able to channel my stress and frustrations via kicks, elbows and punches. I also wanted be able to learn self-defense and know that I can protect myself and others with the knowledge I’ve learned. It eventually started taking a toll on my body and I narrowed it down to Muay Thai and BJJ and the story continues”

I love this because the chick’s a rockstar who rolls and strikes – but she also knows her limits when it comes to the stress releasing hobby she loves. And she’s not alone in employing this place for angst relief. Likewise, Rebecca Custodio echoed my own internal journal as we sat around breathlessly chatting after Muay Thai. She explained why she keeps training in both that discipline, as well as Brazilian jiu-jitsu:

“Depression! It’s really helped me overcome depression. If I don’t train for a while, Mikey [her husband, and our awesome Muay Thai instructor, who should probably have his legs registered as lethal weapons] will start to notice that I’m going through that – just by that look on my face. But after training? It’s like I’m just… clear again. It’s like a purge.” 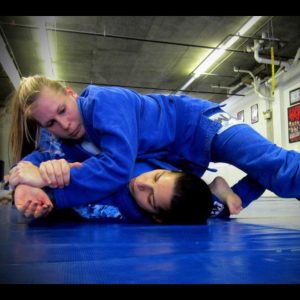 Similarly, another training partner of mine finds release in MMA.

Except, for him, it’s been a life-long commitment and fight against his own mind. Back when he was just pint-sized, Corey D’Aiutolo had issues with focus and self-control. Adamant against even considering ADHD treatment as an option, his father opted instead to enroll him in martial arts. But, if you met Corey today, you’d think he’d been calm his whole life. It seems innate. This southpaw may train mean, but his manner is tranquil as they make ‘em. And, as for focus? Well, he’s a brown tip, holds a Bachelors of science and history, has an anthropology degree, a Masters in education, and (maybe his most impressive feat) currently teaches a bunch’ve high school students social studies. What’s more, he’s passed on his gift by coaching wrestling. But it was all hard won. Corey recounted his story to me recently:

“My parents were advised to have me tested for ADD/ADHD by my elementary school. My father however was extremely anti-psychology, and and thought what I needed was something else to pour my energy into, and my parents signed me up for Isshin Ryu Karate when I was six. The activity was a great outlet at the time, but the Dojo culture was also set up in a way to foster self-discipline in the students. In most martial art styles, you learn to crawl before you’re allowed to walk. We had to learn our stances, how to walk, how to fall, and every little detail that built up over time. Focusing on these small goals helped me learn to prioritize what had to be done to meet bigger goals.” 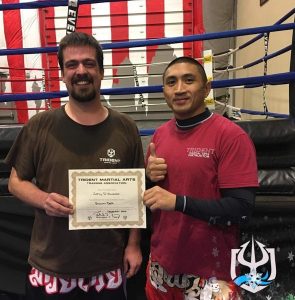 I loved that – the idea of crawling before you learn to walk.

And exactly that’s mirrored in Trident’s junior programs as well.

Just ask Mica Soto, who joined because it was something both she and her little one could use as an outlet. While she joined, in part, to help re-channel her emotions following a break up, she never would have imagined that other single moms would be there, too:


“It really helped to redirect my focus. You can’t think about what’s bothering you when you’re training. But what was also so amazing to me was the community – I wasn’t expecting that. I wasn’t expecting for there to be people like me. The fact that there were other single moms like me, made it even better; I could relate to them and it’s a bond that’s not like any other I’ve had. Also, it’s a great way to get in your fitness and have fun at the same time.”

Indeed, that sense of community can be so important.

In fact, for some Trident students, it’s the reason for leaving other dojos, coming to Trident, and staying here for good. Just last weekend, I was at a party where I had the chance to chat with BJJ blue belt, Josh Delaney. Displeased with his former academy’s general attitude, he’d been on the hunt for something superior. That’s when he had the good fortune of running into a buddy of mine, David Berg. After David told him about where he trains, Josh gave Trident a try. And, after meeting the students and coaches who take their training seriously (minus the massive ego issues he’d encountered elsewhere), he opted to stay. Indeed, that’s something awesome you’ll find about most of the students who train here. Our egos don’t get in the way of having a blast – while improving in the art and aiding each other in doing so. Josh acknowledged exactly that when he told me why he chose this academy over other locales:

“I come to Trident because of the people and the coaches. All are patient and willing to help. That and the dedication and knowledge of the coaches, the encouragement to do better, and the fact that they make it a team sport – even though mma at its base is not.” 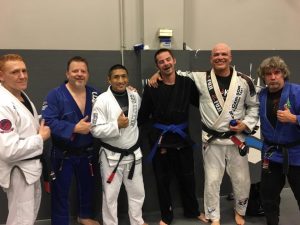 Yes, in the end, we’ve all got our different, specific reasons for training at Trident.

And, if I’m being honest, my specific “therapeutic” reasons change every day. Some days it’s like Corey’s former focus issues – and needing to fine tune my attention. Others, it’s ‘cause I’m suffering the same as Rebecca’s blues – and requiring a cure for it. Some nights, I just feel isolated and crave a sense of community – like Mica found. (Or, ya know, a fun way to work off the sushi and ramen binge from the evening prior.) Then, other days, it’s simply a need to disprove that “you can’t” voice overriding my mind. Yep. When I hear everyone’s reasons for training, I hear a little bit of myself reflected in every account. But – while my reasons for training at Trident may chronically alternate – what never does is my desire to be here.

Because, much like my MMA brothers and sisters, there’s only one thing I “can’t” do anymore:

And that’s quit showing up for more.